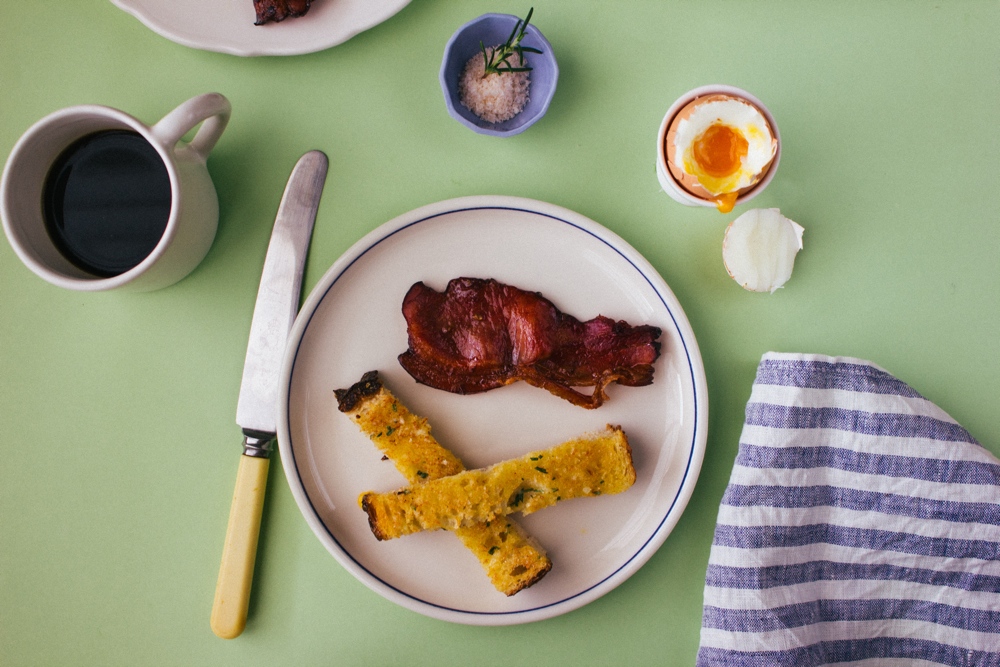 Australian coffee shops are having a moment in New York City. The laid-back approach to serious coffee, the casual yet efficient service and the fresh and light menu options have piqued the interest of New Yorkers, who are opting to try a flat white over a gallon of Starbucks.

Toby’s Estate, a Sydney-based coffee roasting company, opened a cafe in Williamsburg in 2012. I could see it from my apartment, and it would beckon to me, drawing me out the door and up the street to order a breakfast roll. I would sit at the sun-drenched communal table to enjoy softly scrambled eggs sitting on a small sourdough roll, with sharp, melted cheddar holding roasted tomatoes in place. The crowning glory was two strips of crispy bacon, glazed in an inspired blend of coffee, cardamom and maple syrup which resulted in a salty, sweet and bitter communion of flavours that I was unable to resist. So when I saw Sunday Suppers post a recipe for this bacon fantasy on their blog this week, I started plotting a new breakfast.

A “dip-in-egg” was a staple of my childhood. It was a breakfast treat, but also a dinner option for those not-very-hungry nights. Mum would use the egg cooker to produce perfectly boiled eggs and serve them in silver egg cups with white toast cut into soldiers on the side. A liberally buttered soldier would plunge into the yolk, causing an eruption of marigold that would pool on the plate for other soldiers to mop up. Bacon was usually cooked in the microwave, which resulted in a surprisingly crispy finish. With the Toby’s Estate bacon on my mind, I thought this comforting combination could do with an update. 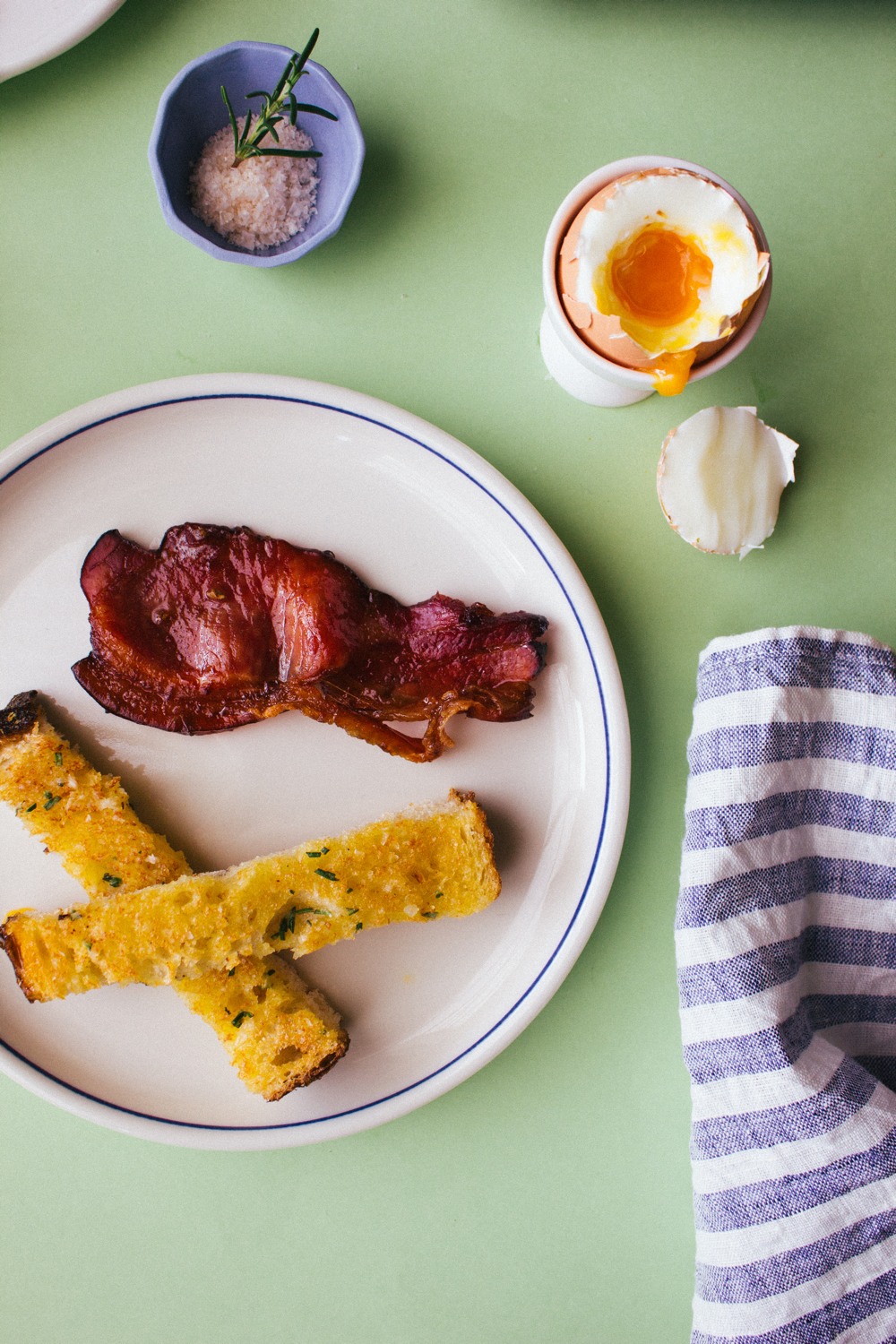 If my new version of dip-in-egg was to truly grow up, the soldiers also needed a makeover. Pre-sliced, white supermarket loaf with margarine was not an equal partner to espresso-glazed bacon. A couple of slices of dense sourdough was more like it, but it needed something more. Inspired by the cheese on the bacon roll at Toby’s, I grated some parmesan into softened butter, and added a sprinkle of rosemary, which is a good partner in any salty/sweet dance. Slathering thick-cut toast with this aromatic butter smelled amazing and when paired with the runny yolk, post dipping, tasted delicious.

Now, for the egg. There is much conjecture as to which method is best for cooking a soft-boiled egg. If you want to geek out, check out this video from America’s Test Kitchen. I’ve included the method that works for me, from How to Cook Everything.

The complexity of flavours and combination of textures in this breakfast make it a real treat for the taste buds. It’s only slightly more effort to glaze the bacon and make the herbed butter, and the result is worth it. 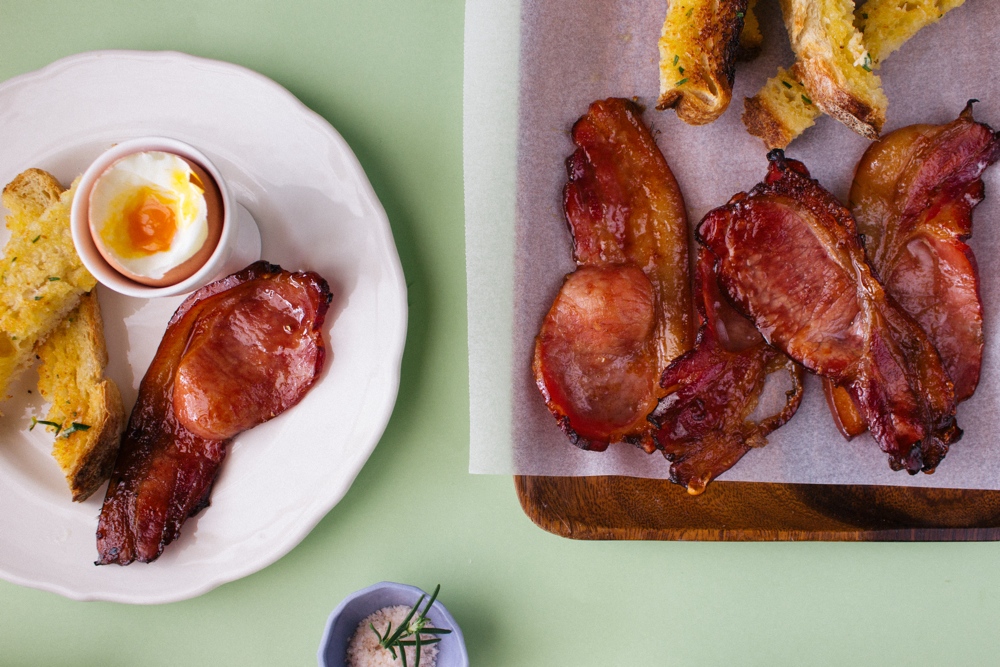 Pre-heat oven to 200C/400f. Line a tray with baking paper and lay your bacon on it. Combine maple syrup, espresso and cardamom in a small bowl and paint the bacon, both sides, with the glaze using a pastry brush. Place in the oven for 10-15 minutes, until the bacon is crispy around the edges. Drain on a wire rack until you’re ready to serve.

In a small bowl, combine butter, parmesan and rosemary, ready to butter your toast.

Fill a saucepan to about two thirds full of water and bring to a gentle boil (not a jacuzzi boil). Use a spoon to lower the egg gently into the water. Adjust the heat so the water barely simmers, then cook for 4 minutes. This time will render the whites soft, but set.

Toast your bread and spread with the herbed butter. Cut into soldiers.

Serve the eggs in egg cups and the bacon and soldiers on a plate. Lay the table with a knife to crack the top off the egg and a spoon to scoop the whites out of the shell once the soldiers have mopped up all the yolk.