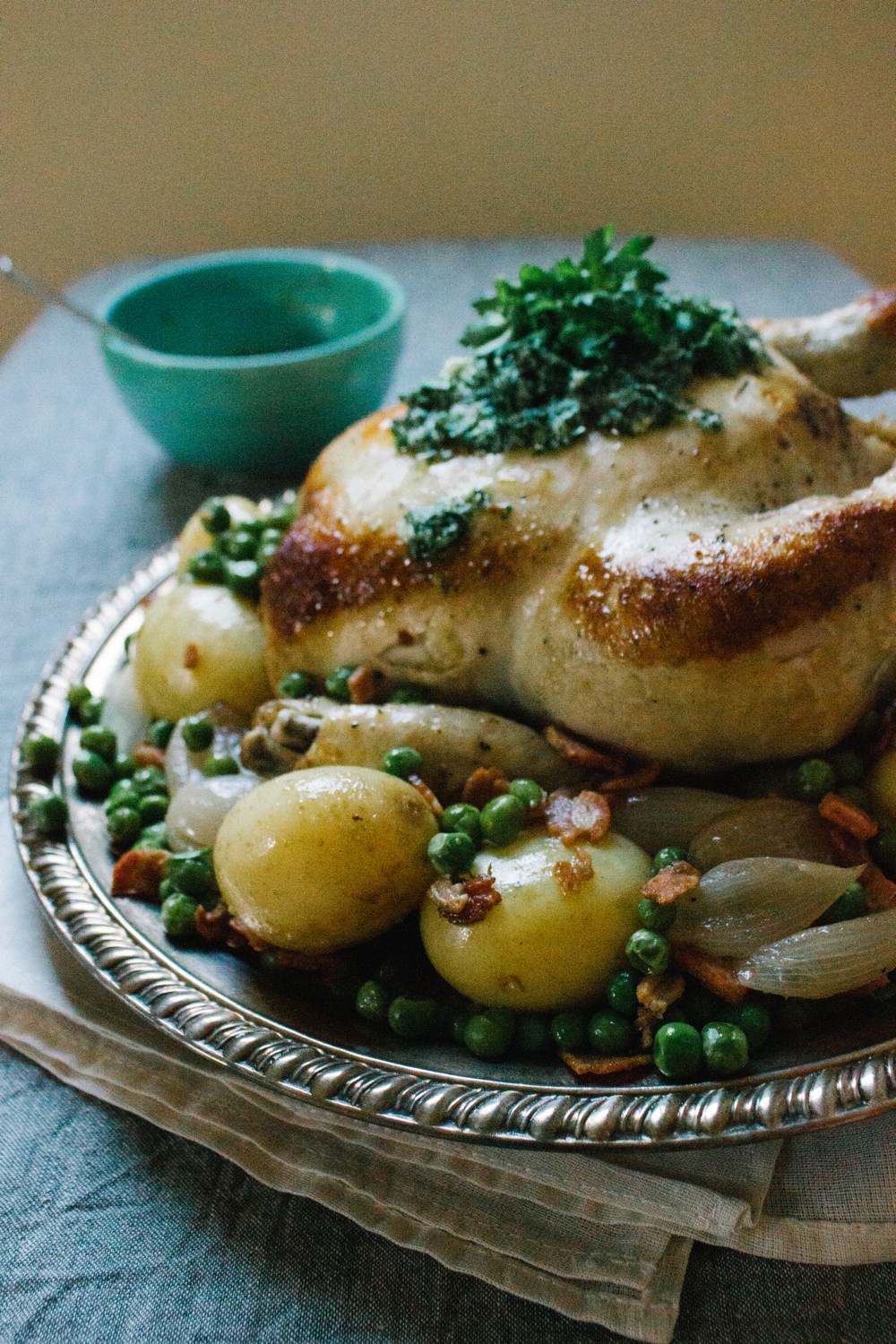 When kitchens were built around large hearths and blackened pots bubbled while suspended over hot coals, pot roasting was a popular technique used to transform cheap cuts of meat into flavourful meals. Not much has changed. Sticking a chicken in a pot with some bacon, veggies and half a bottle of wine will result in a big flavoured, robust meal that will reward a decent appetite.

It’s the teamwork of the meat and the vegetables that I appreciate in a pot roast. They nestle together in the close quarters of a dutch oven, sharing cooking liquid, adding flavour and collaborating to produce a well-balanced offering. 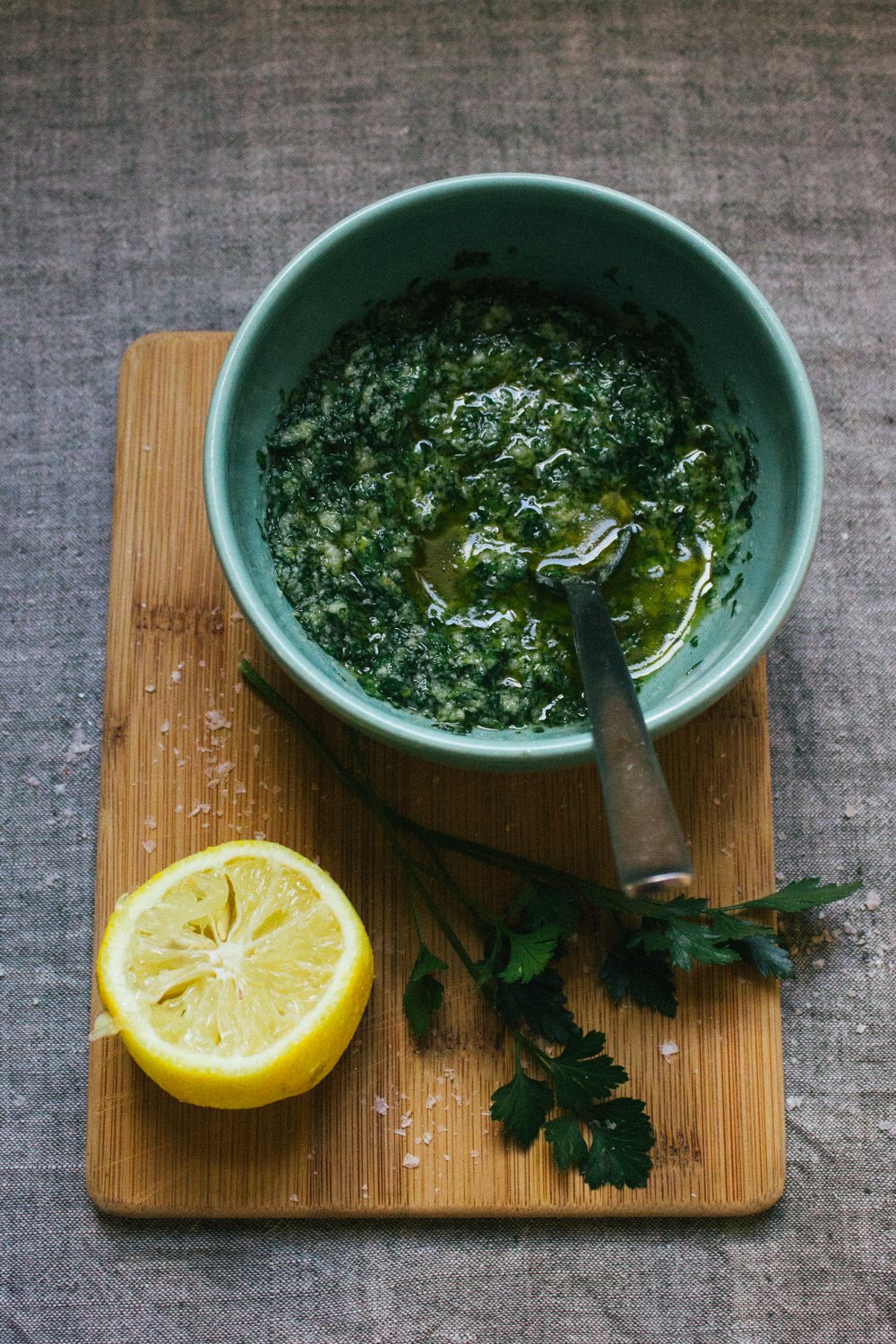 A pot roast requires a heavy, decent sized pot with a tight fitting lid that likes the oven as much as the stove top. Browning the meat before putting it in the oven will give your finished dish that gorgeous golden colour as well as a hit of flavour.  The meat is made succulent by the long and slow braise in the oven, giving the potatoes and aromatic shallots a chance to soften and soak up the seasoning of the  juices.

Root vegetables, aromatics and succulent meat is the kind of earthy meal that grounds you on a winter afternoon. Yet I am loathe to fully let go of summer, so I added a light lemon, parsley and parmesan sauce to this dish to brighten it up. It’s a great sauce for any version of a roast chicken, but when it melts over the chicken and into the sweetness of the peas and shallots in this dish, it’s a particularly welcome addition (though totally optional).

It takes about an hour to cook, but in that hour you’ll have half a bottle of wine to dispose of thoughtfully. Slow cooking is lovely like that. 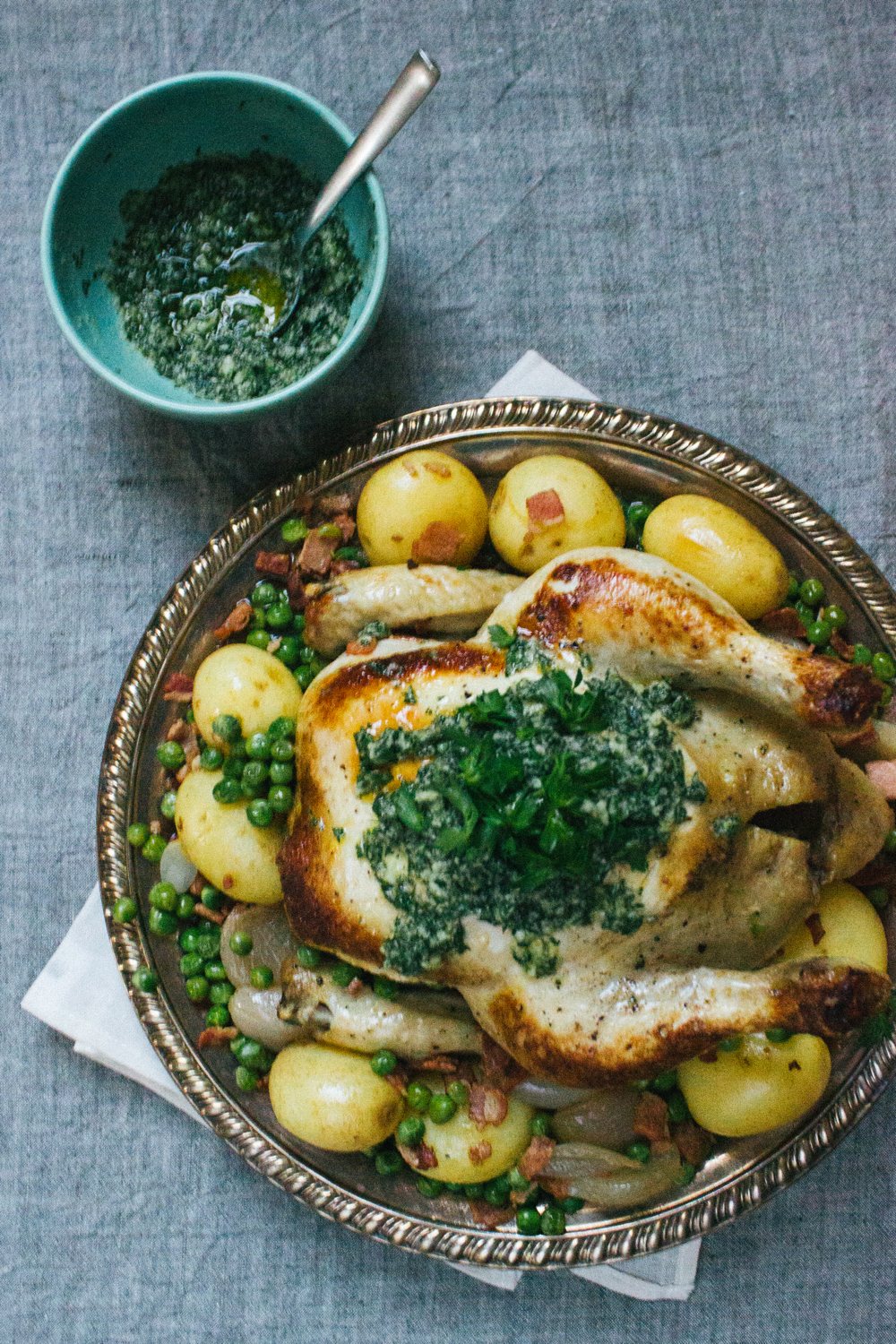 Season the chicken inside and out with salt and pepper. Heat the butter in a casserole dish with a lid until sizzling, then take 10 mins to brown the chicken on all sides. Remove the chicken from the dish, then fry the bacon until crisp. Add the potatoes and shallots, then cook until just starting to brown. Nestle the chicken among the vegetables, pour over the wine. Place the lid on the casserole dish and put in the oven for an hour (a bit more or less depending on the size of your chook).

To make the lemon, parsley and parmesan sauce, combine all ingredients in a bowl, season to taste.

After an hour, remove the chicken onto a big serving tray and place the pan back on the heat. Stir the peas into the buttery juices with the other veggies. Simmer until the peas are cooked through. Remove the potatoes, peas and shallots with a slotted spoon to the serving tray with the chicken. Spoon some of the cooking juices over everything then drizzle the lemon, parsley and parmesan sauce over the chicken.

This is based on a recipe from BBC Good Food

46 thoughts on “Chicken Pot Roast With Potatoes, Shallots and Peas”