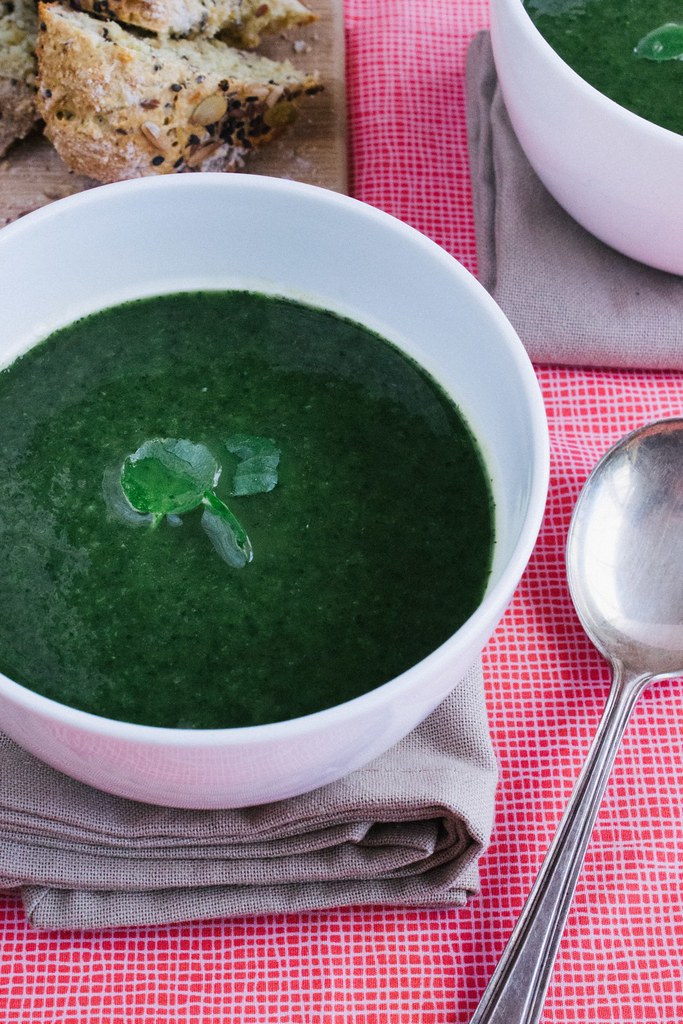 A few spectacular storms and crisper, darker mornings have heralded the start of Autumn in Kyneton. The grass in the backyard is becoming less crunchy underfoot as it soaks up the rain, soothing its sunburn, and the pear and apple trees have started to give us their fruit.

This is my first Autumn in 18 months. The endless Spring/Summer afforded to me from a cross-hemisphere move six months ago has been delightful. I’ve had a year of juicy stone fruit, fragrant tomatoes, crisp lettuce (some of which I grew myself), barbecued meat and long, warm evenings sitting outside with friends.

But as I pack away Summer, preserving fruit, making tomato sauce and pulling up the bolted lettuce, I’m anxious to start a new season of cooking. The produce at the Farmers Markets is also in transition and my basket had a bit of each season in it this week. When I spied a bundle of watercress I also picked up a potato and some spinach to go with the broth I had bubbling away in the slow cooker at home. It’s (finally) time for soup! 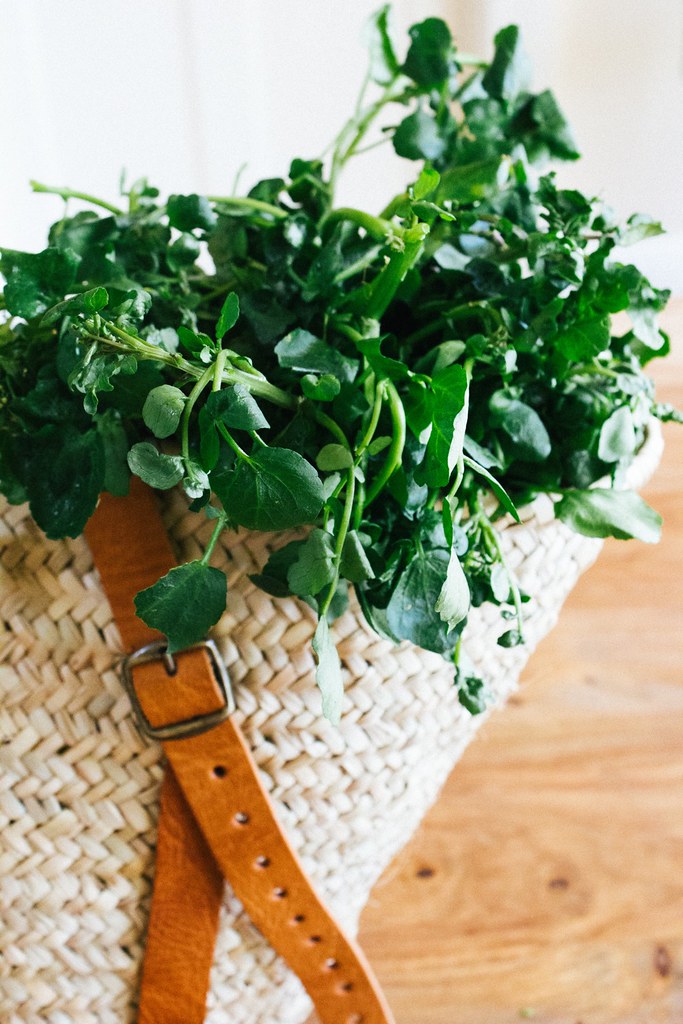 Watercress is a delicate green with a strong flavour. Its peppery kick is best paired with equally strong partners like anchovies, goats cheese and roasted meats. When whizzed into a stock it lends its mineral freshness and vivid green hue, making it a perfect gateway soup between Summer and Autumn. 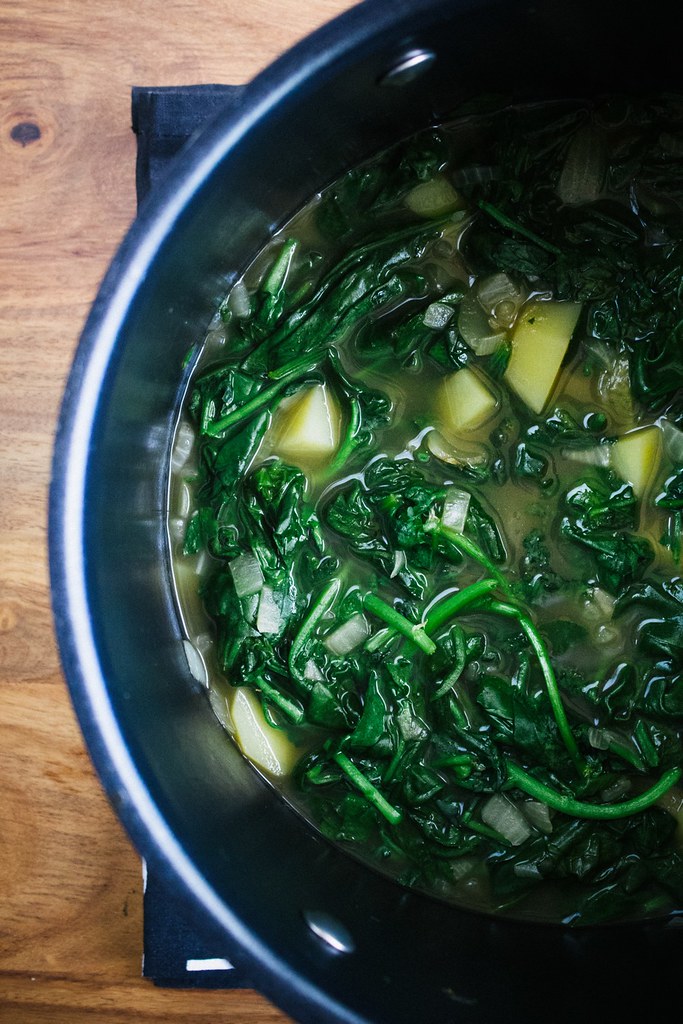 The French and British like their watercress soup creamy whereas the Chinese prefer it more brothy, which is what I felt like. A home-cooked stock is always preferable, but a good quality store-bought one is ever so practical. The recipe calls for more greens than you think will fit in your pot, but if you stir them in in batches, they’ll wilt right down. Just make sure to get rid of the thicker stalks before you toss the watercress in, as they’re a little woody. A stick blender will make quick work of turning your stock of dangly greens and potato chunks into a smooth, emerald-coloured soup. A dollop of creme fraiche or greek yoghurt would fancy up your bowl, perhaps sprinkled with some nutmeg. Or just eat it plain for a delicious serving of your daily greens.. 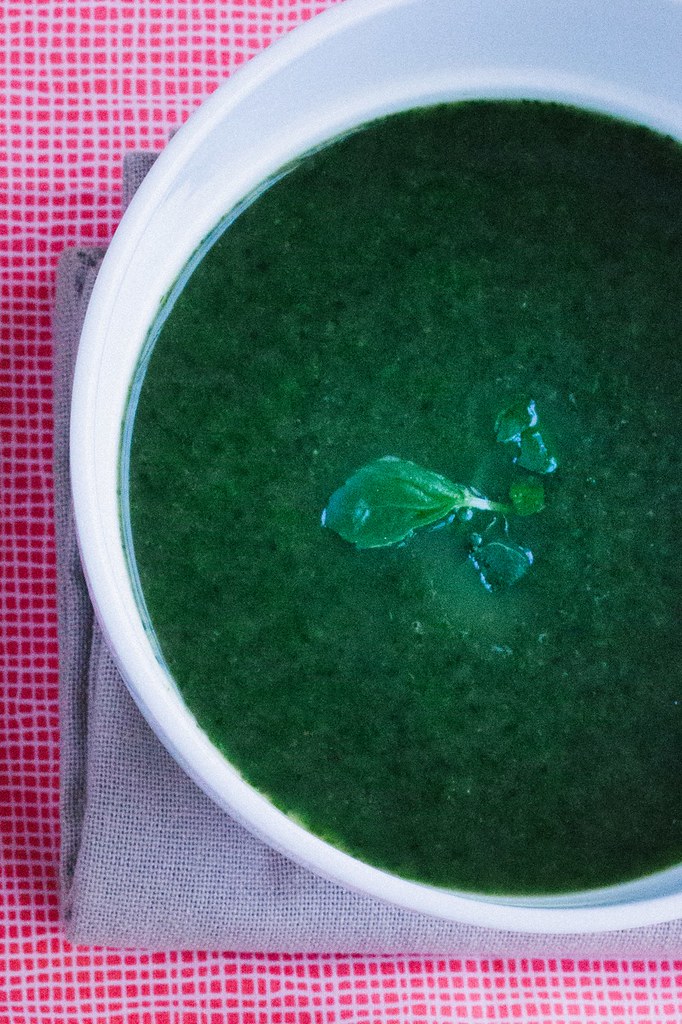 In a large pot fry the onion in the olive oil until it’s soft. Add the potato and cook for three minutes then add the stock and simmer for a further 20 minutes, or until the potato is cooked.

Add the spinach leaves and cook on a slightly higher heat for five minutes, stirring so the leaves wilt. Add the watercress and stir for another minute or so.

Take the pot off the heat and use a stick blender to liquidize the soup. Season with salt and pepper and add the nutmeg.

Serve with crusty bread. I baked a loaf of 6-seed soda bread while I cooked the soup. I used Hugh Fearnley-Whittingstall’s recipe, and opted for the seeded variation he explains at the end.

23 thoughts on “Watercress and Spinach Soup”