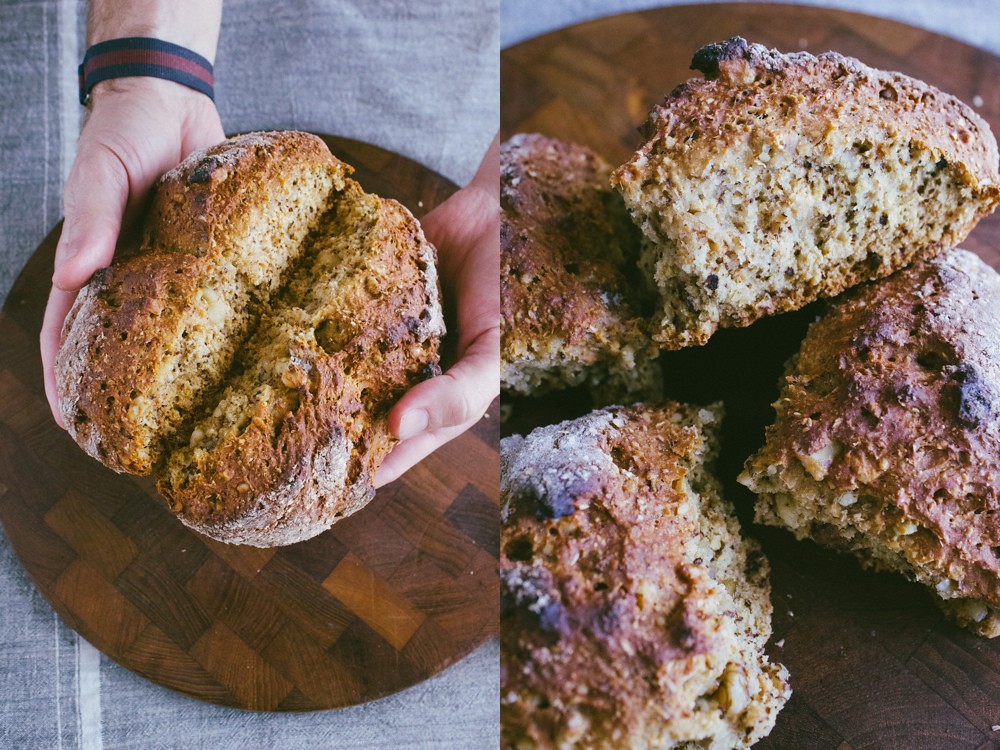 Baking soda, or bread soda as the Irish call it, came into kitchens in Ireland in the 1800s. It was relatively cheap and quite a magical ingredient for it meant that people without ovens, and that was most people, could bake their own bread. They combined wheat from their fields and buttermilk from their cows with baking soda in a cast-iron pot and nestled it into hot coals to make bread. The baking soda replaced yeast and kneading to leven the bread, which meant it wasn’t only more accessible, but much faster than baking normal bread. Which is why I like it. 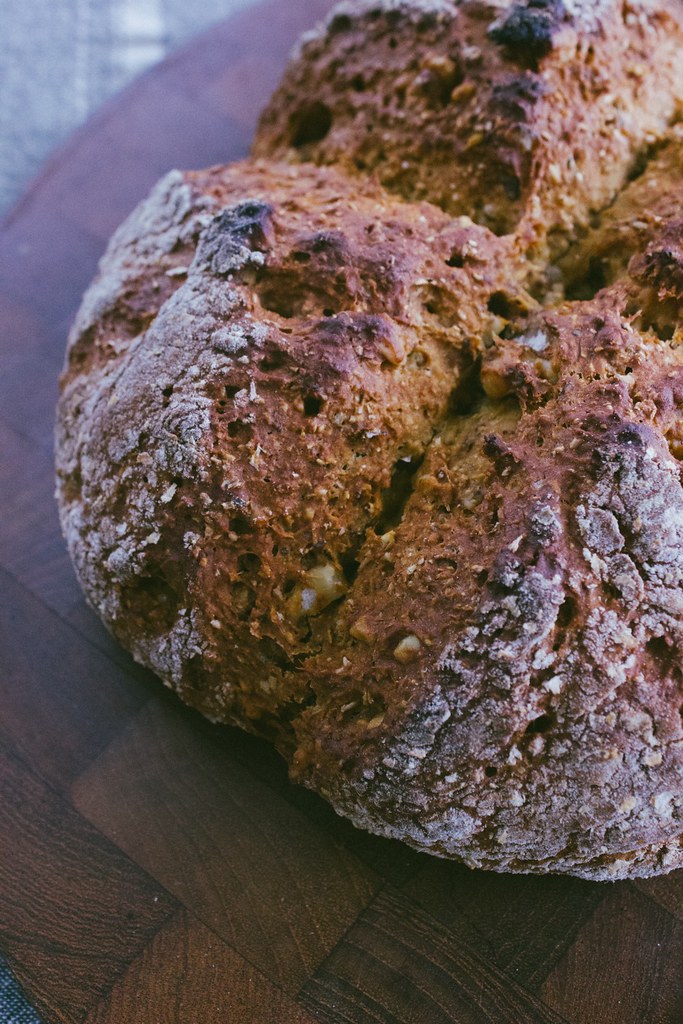 I was watching Hugh Fearnley-Whittingstall in his enviable River Cottage on the telly the other night and sat transfixed through a whole hour dedicated to bread. Although delighted by the crusty white loaves and wood-fired sourdoughs, it was the soda bread and its promise of ease and taste that sent me to the kitchen to turn on the oven. 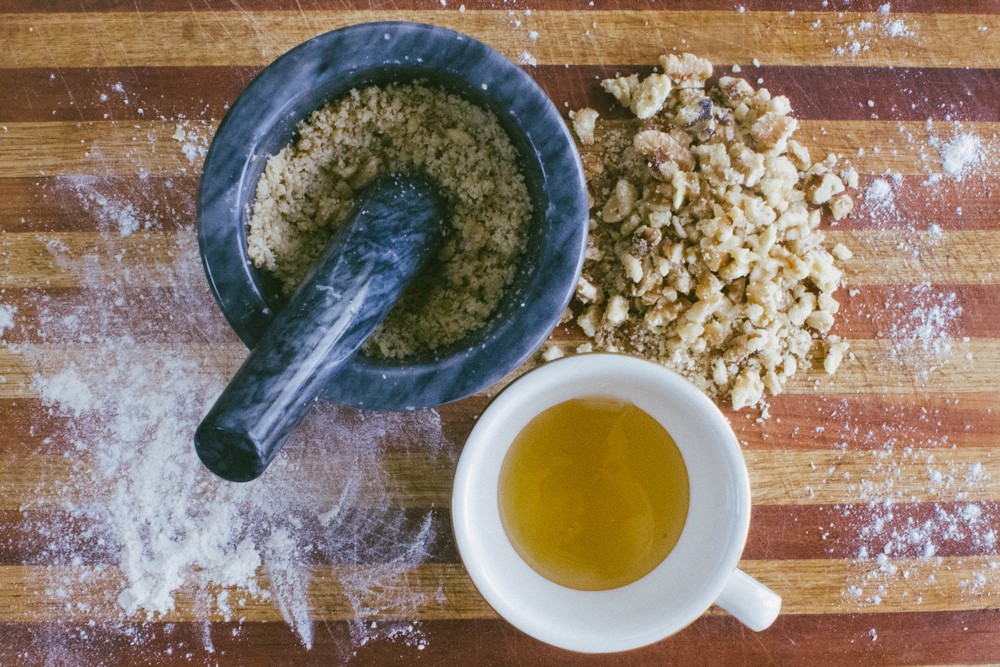 A traditional soda bread is made with wholemeal flour and buttermilk. In America you can find a version of soda bread made with white flour, eggs, butter, caraway seeds and raisins. Although tasty, it is not what the Irish consider soda bread. This recipe is a riff on the traditional base, adding nuts and honey, but replacing buttermilk with water, which makes it even more accessible. The bread is blessed with a deep cross scored into the dough before cooking. This helps the heat penetrate the middle of the dense bread to cook it evenly, and also means that the final product breaks open beautifully, ready to serve to hungry mouths. 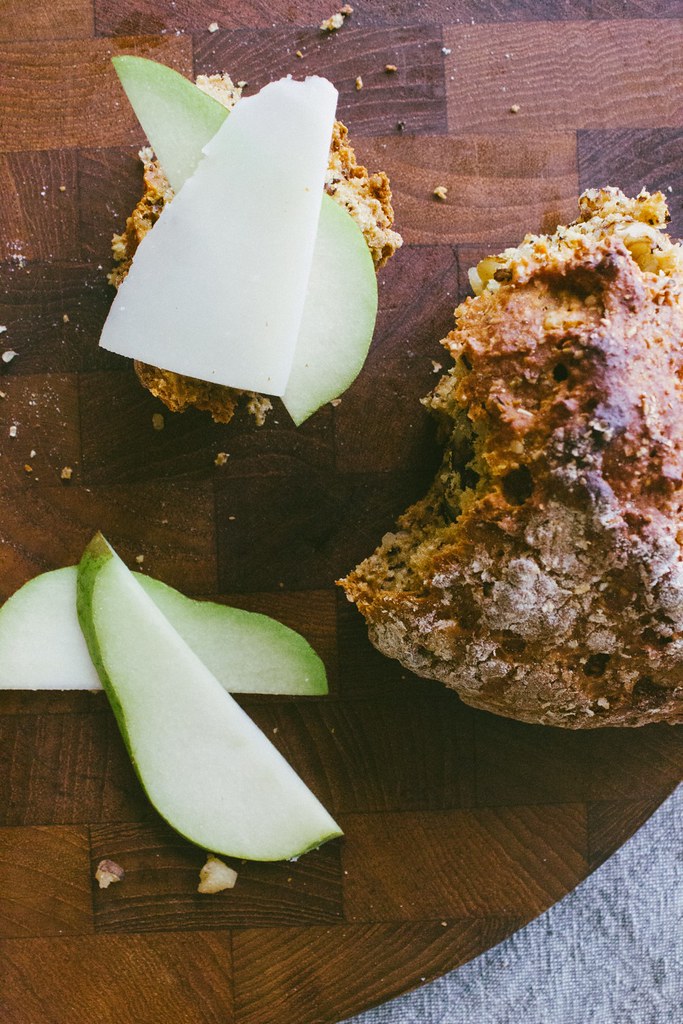 This loaf is a cross between bread and a scone. Its dense yet pleasingly crumbly and the flavour is a happy union of sweet and savoury. It is best eaten directly from the oven with a generous smear of soft, golden butter. But it is also an excellent base for a slice of crisp pear and thick chunk of stiff cheddar. It would also accompany a hot bowl of cauliflower soup nicely. It’s the perfect thing to pop in the oven on a cold winter’s afternoon for a treat, or simply when the bread bin is bare.

Preheat the oven to 200C/400F and lightly oil a baking sheet.

Divide the walnuts into two roughly equal piles. Put one half into a food processor or a mortar, then crush to a coarse powder. Using your hands, break the other pile of walnuts into large, rough chunks. Put the honey in a pan with 150ml / 5 fl oz water and heat gently until the honey dissolves.

Put the flour, baking powder, salt and all the walnuts in a large bowl and combine. Pour in the honey water and mix to a soft, loosely held together dough – don’t knead or overwork it.

Turn the dough out on to a lightly floured surface, shape it into a rough, round loaf and place on the oiled baking tray. Slice a deep cross into the top, going almost right the way through to the baking sheet.

Bake in the preheated oven for 30-40 minutes, until well risen and golden brown. Remove, set aside to cool and serve immediately – at the very latest, eat within 24 hours.

From Hugh Fearnley-Whittingstall, The Guardian, 2007