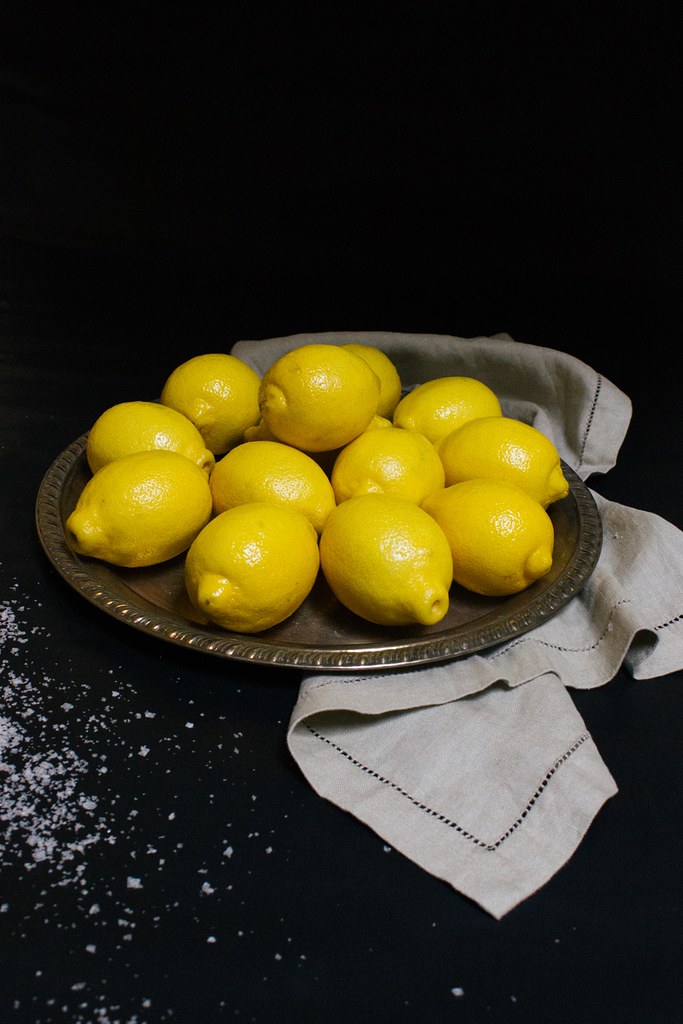 It’s summer holidays. The days are long, hot and the markets are filled with colourful fruit and veggies bursting with sunshine. It’s preserving season, that time of year when it’s possible to capture a season in a jar and save it for shorter, bleaker days ahead.

Lemon tree branches are currently heavy with golden fruit. I’ve been using a lot of lemons this season. We live in an area dotted with natural mineral springs. Some enterprising body tapped our local spring in 1890 and it’s still possible to pop down to the tap, pump the wooden handle and collect bottles of slightly effervescent, natural mineral water. How romantic. Except that it tastes terrible. The sulphur in the water hits your palette and screams “EGGS!” as you try to chug down a glass in the hope of receiving the touted health benefits of the brown-ish water. I’ve found that the only way to make our local mineral water drinkable is to pour it over ice and and squeeze half a lemon into it. There’s something about the clink of the ice in the glass that hints at more tasty contents and the lemon distracts your tastebuds from the lurking sulphur.

Despite my increase in water consumption, there’s still more lemons to be had. So, inspired by my recent journey into Middle Eastern cuisine via Ottolenghi’s beautiful cookbook Jerusalem, I set about preserving lemons. 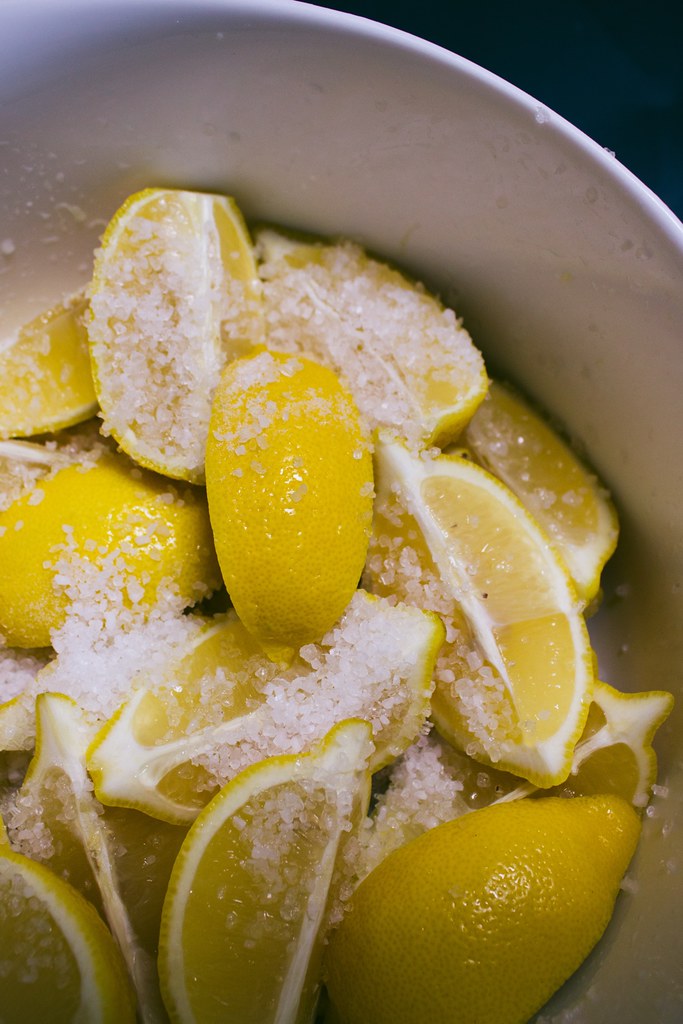 Preserving involves cleanliness, and to be honest, this is the bit that has always daunted me. Sterilising jars seemed too much like science and the threat of getting it wrong and wasting a day’s worth of preserving effort was too high a risk. Turns out, it’s not that hard and armed with tongs and an oven-mitted paw, I managed to do it without burning myself. The rest of the process is simple and incredibly satisfying as you massage the lemons, releasing their oils to create a beautifully fragrant kitchen, and then squish them, Tetris-like, into jars.

Using a jar with a wide mouth makes squishing the lemons in much easier. If you’re using a small mouth, don’t bother squeezing the first few, just place them in and push down from layers above as you place higher quarters. The finished jars look beautiful, their golden contents shining out, promising a little bit of summer for later. 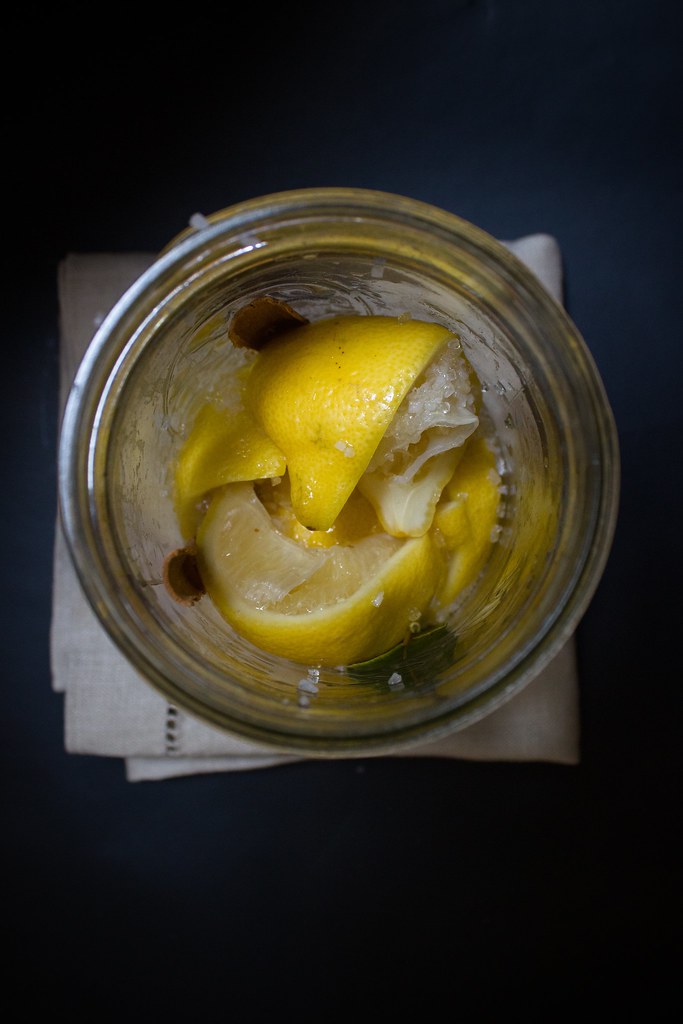 These lovely jars will sit on a shelf in your pantry for a month before you can use them. The wait will be worth it as they will happily stay on said shelf for a year, offering you a little quarter of sunshine when you need it for recipes like these: 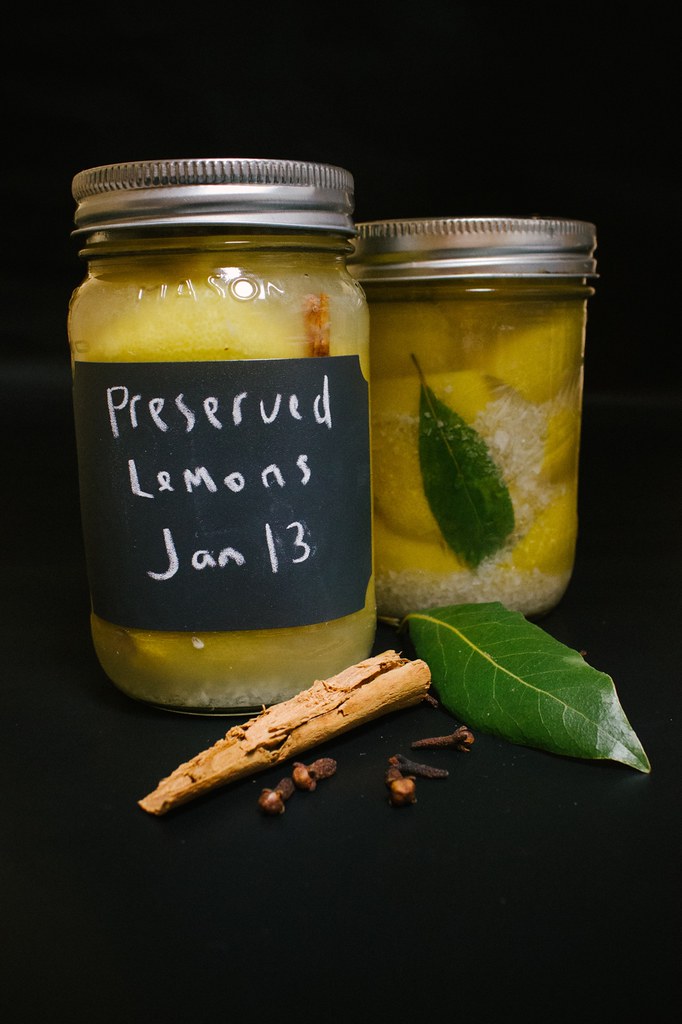 Put a stock pot of water on the stove to boil and set your oven to 150c/300f. Wash two 500ml (1 pint) jars in hot soapy water and rinse. Place jars in boiling water carefully using tongs, leave to boil for 10 minutes. Remove with tongs (and your other hand in an oven mitt to help if needs be) and leave to drain upside down on a clean kitchen towel. To dry the jars completely, place them on an oven tray and in the oven for 5-10 minutes. Remove jars from the oven to fill them while still hot.

Scatter a spoonful of salt into each jar. Tip lemons into a wide plastic bowl with remaining salt, mix and massage fruit vigorously.

Pack lemons into jars, curved-side out, inserting pieces of bay leaf, cloves and splinters of cinnamon stick at intervals. Press down hard on the fruit to release as much juice as possible. Spoon salt mixture left in bowl over fruit. If a wedge of lemon is not covered by juice it can develop a harmless but inelegant white mould. To avoid this, squeeze extra lemon juice over the top.

With a clean cloth dipped in boiling water, wipe neck of jar free of salt and cap tightly.

Let the lemons mature for at least one month in a cool spot (not the fridge) before using. Preserved lemons will last a year without refrigeration.